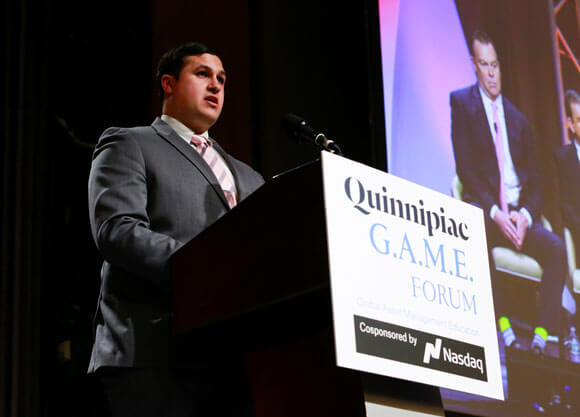 It’s rare for a conference of this size and visibility to be hosted by students. Student organizers gain new perspectives not only from speakers and panelists but also from fellow students across the country and from overseas who look at world events through the lens of their own experiences. 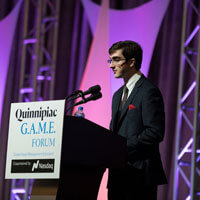 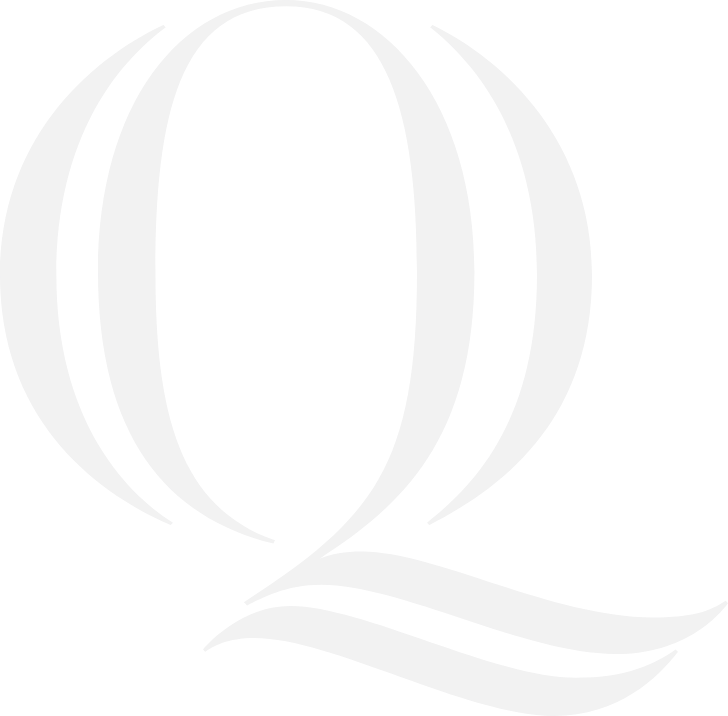 “Nowhere else can someone close the stock market, meet with chief investment officers of top investment firms, compete in a student-managed portfolio competition against international teams, and meet students and professionals from across the U.S. and 54 countries, all while staying in the financial capital of the world, New York City, for three days.”

On Top of Her GAME 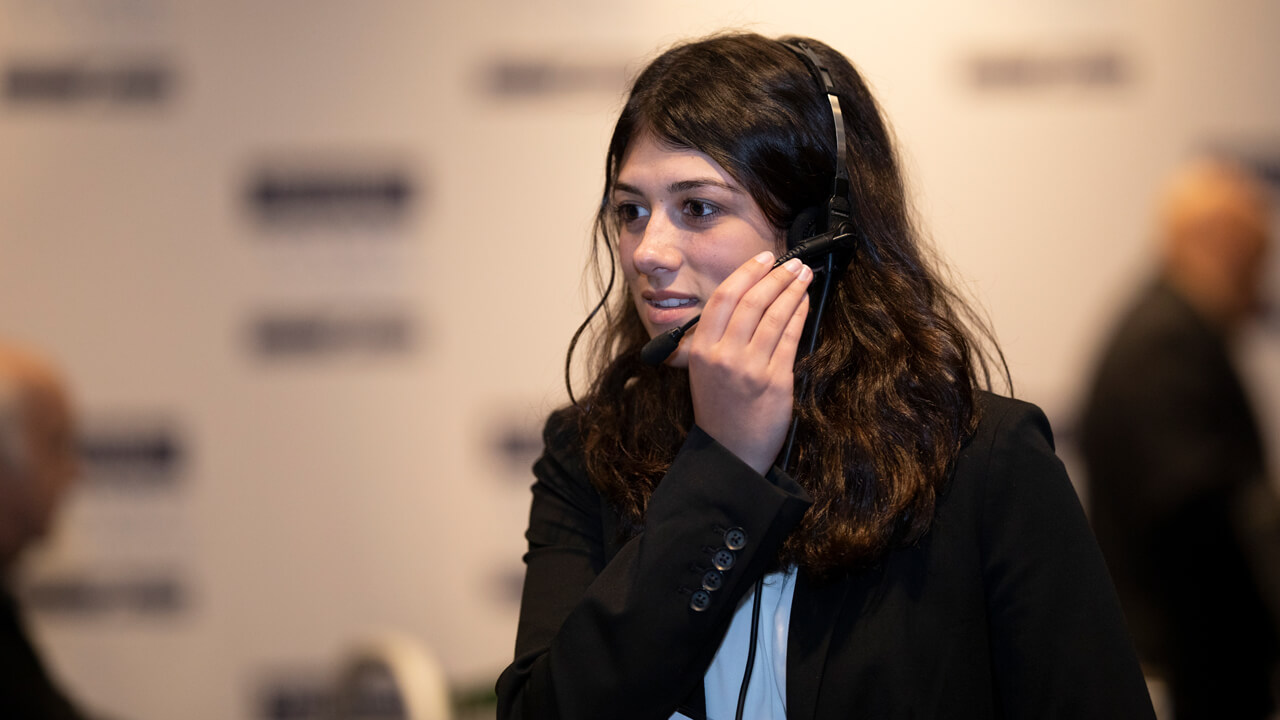 Megan Martucci ’18, MBA ’19, paced the carpet, pursed her lips and exhaled. After nearly a year of planning, it was a waiting game now.

As the student chairwoman of the Quinnipiac GAME IX Forum (Global Asset Management Education), the world’s largest student-run, three-day financial conference, Martucci’s job was to direct almost 40 volunteers from the School of Business. She was sharply dressed in a dark suit with heels, a white blouse and the requisite black headset, a passed torch of sorts for this crucial role.

It was 7:12 a.m. on March 28 in the big city. The West Promenade on the third floor of the New York Hilton Midtown Hotel still had a clear path to the ballroom, a massive space large enough for the 1,600 students and faculty mentors here from 154 colleges and universities representing 50 countries and 46 states.

But not for long.

President Judy Olian’s opening remarks were fast approaching at 8 a.m. Meanwhile, a sea of students still hadn’t come down from their rooms to the registration tables.

“There’s going to be a big rush at the end, you watch,” Martucci warned the student volunteers sitting behind the “A-D” sign at one of the registration tables. A few feet away, another student worker squatted like a baseball catcher, running a handheld steamer across a fabric screen set up as a backdrop for GAME selfies and videos.

Martucci, a finance major from Patterson, New York, earned her bachelor’s degree and MBA at Quinnipiac in four years as an accelerated dual-degree (3+1) student. She is smart, accomplished and relentlessly driven.

So, as one might imagine, Martucci’s prediction was spot on. By 7:45 a.m., the registration tables were hidden by throngs of students, but there emerged a palpable poise behind the tables. “Next please” instantly became the most professional and efficient greeting of the morning.

Among the colleges and universities that attended this year’s GAME Forum were Villanova, Purdue, Rice, Northeastern, the University of Chicago and Washington University in St. Louis.

Even on just six hours of sleep—with duties that began promptly at 5:30 a.m.—Martucci was buttoned up as student chairwoman. This was her third GAME Forum, her first time as chair. The forums provide the opportunity to leverage everything she had learned in Hamden and New York, from introducing the keynote speakers and connecting with business schools all around the world to closely working with the assembled VIPs.

Overall, 106 financial firms and organizations were represented at GAME IX including 148 speakers, panelists, workshop presenters and student-managed portfolio judges, according to finance professor David Sauer, who chaired the program.

“This is such an amazing experience for Quinnipiac students,” Martucci said. “It isn’t until you get here that you realize how busy it is and how much there is to do. Now that I’m in charge of all the [student] volunteers, I have to plan everyone’s schedule and make sure all the shifts are filled so that everything runs smoothly.”

With the registration lines finally evaporated now, Martucci made her way to the ballroom. She sat by herself near the stage, waiting for the program to begin. It was time for Olian to address the crowd.

“To all the students who are attending, seize the opportunity to have conversations with fellow students about global currency or trade wars,” urged Olian, former dean of the UCLA Anderson School of Management. “And later, pick up those conversations with faculty and market experts one-on-one on those topics.”

Olian spoke thoughtfully and fluently about global markets for several minutes. As she left the stage to applause, Olian headed straight for Martucci and sat next to her. After a smile and some kind words from the president, it was Martucci’s turn to address this impeccably dressed casting call for 21st-century business jobs.

“After I came off the stage, President Olian said I did a good job, so that meant a lot to me,” said Martucci, who had practiced the intro enough to eliminate butterflies. She commuted to Stamford, Connecticut, last summer and again this school year to transform an internship with global conglomerate Henkel into a job as a financial analyst after graduation.

“It’s awesome seeing women in leadership positions at GAME,” Martucci added. “Diversity is so important to solving problems and being successful in business or anything else. I think that’s what makes this conference so great, hearing all these views and opinions from people all over the country and all over the world.”

Heading out after the panel discussion, Cohen, a senior investment strategist and former president of the Global Markets Institute, said she is encouraged by the career outlook for women in finance. But women are still the minority in these roles.

“There are notable opportunities for women in finance, particularly those who are well prepared, either with economics or finance training,” Cohen said. “Women have shown they can do an extremely good job in positions involving research analysis and portfolio management. Very often, portfolio managers who fail do so not because they’ve missed the upside, but because they have failed to properly recognize the downside. Women seem to do a much better job of risk-benefit analysis in that regard.”

Adam O’Rourke ’18, MBA ’19, an accelerated dual-degree (3+1) graduate, was among the student volunteers Martucci directed. On the second day of the conference, O’Rourke served as student ambassador to David Kudla, CEO of Mainstay Capital Management and the GAME program co-chair.

O’Rourke also attended GAME Forum as a freshman. He said his finance education at Quinnipiac prepared him well to get more out of the experience this time around.

“It’s amazing how much more I understand now,” said O’Rourke. “It’s amazing to have this kind of access to industry leaders and professionals, not just for networking purposes, but also to learn from them.”

Martucci, O’Rourke and dozens of other Quinnipiac business students also scored an exclusive look inside Nasdaq headquarters in Times Square. The annual tradition has become one of the highlights of the GAME Forum.

On the second day of the conference, Rich Hanley, associate professor of journalism, served as moderator of a panel discussion titled, “The Future of Financial Reporting.” The topic driving the conversation was a recently released Quinnipiac University Poll that found 60 percent of adults believe “the way economic news is reported does not accurately reflect the reality of the economy for average Americans.”

As GAME came to a close, Martucci exhaled once more, only this time without the mantle and responsibility of the student chair. But one question still remained: Who would be next year’s student chair?

Martucci explained that as part of her duties, she gets to name her successor. After considering the list of candidates, Martucci selected Greg Kaulins ’19, MBA ’20, this year’s VIP chairman and another finance major in Quinnipiac’s accelerated dual-degree program.

“I chose Greg because he is very smart and driven. Similar to me, he has worked his way up in his three years at GAME. His freshman year he was a volunteer, last year he was co-chair of VIP and this year he was chair of VIP,” Martucci said. “In the end, I believed Greg would be a great fit for GAME X. He is committed to any task at hand, and I’m confident he will do a great job leading the team next year.”

Get Into the GAME